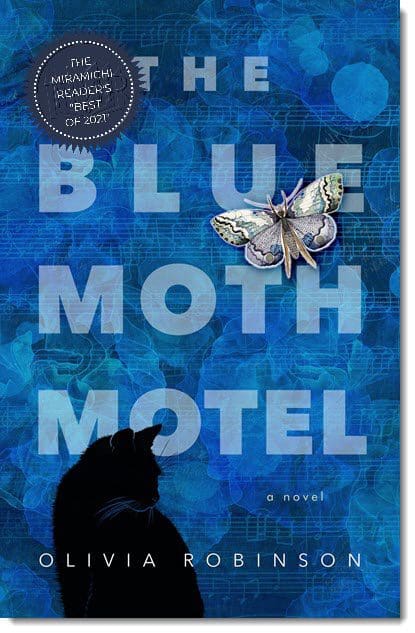 The one comparison that came to mind repeatedly as I read The Blue Moth Motel by Olivia Robinson was how it reminded me of Miriam Toews, which is high praise! But also because it had very similar themes: two sisters, unconventional childhood, a strained relationship in adulthood. The Blue Moth Motel is a delightful book, and though it’s not entirely happy or conclusive, it’s a cozy, complicated story about family and the dysfunctions even the most loving ones have.

Iris is attempting to pursue a career as a singer in England when she receives devastating news from her doctor: she has nodules on her vocal cords and must immediately stop singing or even speaking, to see if total rest will solve the problem for her. Suddenly unable to work two of her jobs, Iris is anxious about what she’ll do for money. She’s not ready to move in with her girlfriend Julia yet, though it would help – and arriving with her own personal devastation is an invite from her sister Norah back in Prince Edward Island. Norah is reviving the summer Blue Moth Extravaganza, a party they held as children every year at the Blue Moth Motel, to celebrate the anniversary of the moths’ arrival. Iris is surprised and then dithers over whether or not to go, sinking back into her memories of their childhood.

Norah and Iris grew up at the Blue Moth Motel, where their mother Laurel worked and was owned by their grandmother Ada. Laurel’s partner, Elena, also worked there, and they lived on the property. Shunned for being a bit odd and living at the weird motel, Iris and Norah are each other’s playmates, confidantes, and best friends. Iris is more outgoing, while Norah is shy and mysterious. Their childhood is strange but loving, the motel their playground, their imaginations transforming it. And yet while Norah’s dreams were smaller and she never left PEI, Iris wanted more than anything to escape the only place she’d ever known. When confronted with the possibility of going home, she hesitates, because despite the happiness she had there, it was still confining.

And this is what I think is most masterful about The Blue Moth Motel: Robinson brings together all of the conflicting character emotions and layered relationships into a loving, gentle, compassionate novel. I was drawn into their family, the wonderful shabbiness of the motel, and the idyllic summer days on PEI. This was an immediate classic in my own collection, and I’m so happy to have read it. I hope you enjoy it as much as I did.

Olivia Robinson is originally from the Annapolis Valley, Nova Scotia, and currently lives in St. John’s. She completed her BA in English at UPEI and her MA in Creative Writing at Memorial University. Her work has appeared in Riddle Fence, Cargo Literary Magazine, and the UPEI Arts Review. In 2020, a draft of The Blue Moth Motel was shortlisted for the Newfoundland and Labrador Credit Union Fresh Fish Award.

This article has been Digiproved © 2021 James Fisher
Acknowledgements: Alison Manley
Some Rights Reserved
Liked it? Take a second to support us on Patreon!

Alison Manley bounced around the Maritimes before landing in Miramichi, NB, where she works as a hospital librarian. She has an honours BA in political science and English from St. Francis Xavier University, and a Master of Library and Information Studies from Dalhousie University. When she's not reading biomedical research for her work, she likes reading poetry, contemporary and historical fiction, and personal essays. Noted for a love of bright colours (and lipstick), you can find her wandering the banks of the Miramichi River with a book and a paintbrush.

Coming soon on the TMR Podcast! An interview with author @bowiechuck in which we discuss his start in writing (it got a B in grade 8), travel as inspiration and writing female characters. #linkinbio to the TMR Podcast.