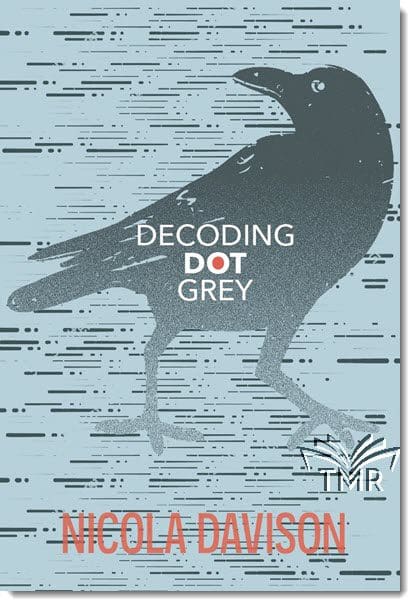 Decoding Dot Grey, Nicola Davison’s beguiling novel (after the suspenseful and moving In the Wake), takes the reader into the chaotic world of an unusual young woman on the cusp of adulthood, facing tragedy and learning how to cope with profound loss.

Eighteen-year-old, socially awkward Dorothy “Dot” Grey prefers to spend her time with animals rather than people. It’s not that she dislikes people in particular, but she finds the social demands of human interaction frustrating and stressful. A huge part of her problem is that a year ago her mother was gravely injured in a hit-and-run accident—struck at the side of the road in the dark by a driver who didn’t see her—and is now lingering comatose in a hospital. The sudden absence of her mother’s free-spirited influence from her life has left Dot confused and emotionally adrift. Despite her father’s urging, Dot cannot bring herself to visit her mother in the hospital, questioning the point of making such a futile gesture when her mother would not know she was there.

Motivated by a need to exert her independence and to escape the smothering kindness of her grieving father, Dot has moved out of home into a shabby basement apartment, along the way amassing a collection of winged and multi-legged roommates: crickets, sowbugs, a domesticated rat, and the latest addition to the menagerie, an injured crow. Dot’s salvation at this time of great personal upheaval is her job at an animal shelter, where she has proven herself to be a diligent, resourceful and devoted employee. When an awkward young man named Joe shows up at the shelter wanting to volunteer, Dot believes she recognizes a kindred spirit, someone who is just as socially inept as she is. Despite some doubts, she begins to regard him as someone she can trust.

In her second novel, Nicola Davison has written a captivating story from an eccentric young woman’s perspective, someone who is emotionally guarded and riddled with uncertainty about her place in the world among humans but is openly and impulsively affectionate when it comes to her animal companions. Dot’s bracingly snarky voice is a treat: engaging and entertaining, and thoroughly convincing. Dot Grey’s bittersweet story of loss and acceptance of life’s harsh realities touches the reader on many levels, and in the end, teaches that the most reliable source of truth and solace is one’s own heart.

Davison’s book is being marketed as YA, but there can be no doubt that adult readers will find much to enjoy in these pages.

Nicola Davison is a professional photographer and the author of In the Wake and Decoding Dot Grey. Her first novel won the 2019 Margaret and John Savage First Book Award and was a finalist for the Dartmouth Book Award. Nicola is a member of the Writers’ Union of Canada and the Writers’ Federation of Nova Scotia where she completed the Alistair Macleod Mentorship Program; polishing off the umpteenth draft of her first novel with her mentor, Carol Bruneau. Born in Nova Scotia, she has lived in too many places and done just enough world travelling to appreciate home. She lives in Dartmouth with her boat-crazy family and delightfully stubborn Basset Hound. See what Nicola is up to online at https://www.nicoladavison.ca

Ian Colford’s short fiction has appeared in Grain, The Antigonish Review, The Fiddlehead and other literary publications. His books are Evidence, The Crimes of Hector Tomás, Perfect World and A Dark House and Other Stories. His work has been shortlisted for the Thomas H. Raddall Atlantic Fiction Award, the Journey Prize, and the Danuta Gleed Literary Award. A new collection of linked stories, Witness, will be published by Porcupine's Quill in spring 2023.

Reposted from @vehiculepress “HOTLINE intertwines hope and sorrow to create a moving story that sears the heart.”—Zeahaa Rehman, @quillandquire