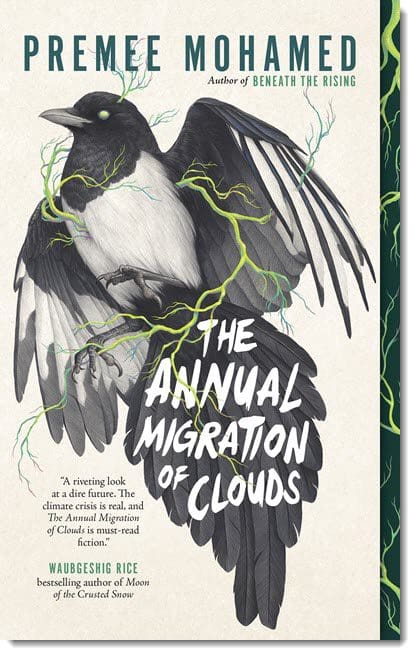 One November morning, after staying up late to finish Premee Mohamed’s riveting dystopian novella, The Annual Migration of Clouds, I woke up to news that seemed similar to the fictional world I’d just left.

First, I received an email from my brother in BC, reassuring me that he and his family were safe. (Safe? Safe from what? I blithely wondered from my kitchen table in Toronto, having somehow failed to notice the words ‘atmospheric river’ in my previous day’s doom scrolling). The second sign of Mohamed’s prescience was a CBC radio interview with a woman whose back yard in suburban Pickering, Ontario was being invaded by Eurasian wild boars, an invasive species that, if it interbred with the local pig population, could actually cause them to devolve. Then, it was back to the usual roller coaster of Covid-19 updates. Reality seemed to be edging eerily close to the Alberta-based scientist-poet-fiction writer’s vision of a future transformed by climate emergencies, invasive species, and novel infections.

It’s not easy to build a believable dystopian fictional world that looks back with both longing and contempt at the simple pleasures of the Before Times (store-bought food, medicine, electricity, etc.) through the eyes of relatable, fully developed characters. The Annual Migration of Clouds succeeds on all levels.

A tightly compressed coming-of-age story, the book’s central character is Reid, a teenager who lives with her mom on a derelict university campus in what is clearly Edmonton of the After Times. Reid has grown up in a world that has lost most of its technology and systems of communication. The oldest members of her community can remember the Before Times but Reid doesn’t know what it’s like to touch a switch and have lights flicker on or eat food that wasn’t grown or hunted down (enter the feral hogs). Malnutrition is an ongoing threat, as is a creepy disease called Cad, a possibly-sentient parasitic fungus that sometimes does its best to keep its host alive, but other times kills its host in a gruesome fashion. Reid is aware that her own Cad infection may be controlling her decisions and actions, as well as her mother’s –– a chilling device which is all too believable, given the tough little son of a bitch (to quote from the movie Alien) that our very own coronavirus has turned out to be. The description of the attempts to learn to live with Cad sounds awfully familiar: “For generations we have waited for it to become normal. And it has not. We are still horrified. And there is nothing we can do about it.”

However, the central conflict that drives this superb book is not the creepy parasite or the survival of our species in a post-civilization world, but Reid’s struggle to decide whether to face the unknown dangers of traveling to a distant university that her mother suspects may not even exist. Mohamed has grounded her story in the ambitions, intelligence, and emotions of a young woman with a strong moral compass and powerful sense of self. We’re cheering her on, but we’re also afraid for her – what dangers will she face once she heads off into the Unknown? What will the Cad make her do, or prevent her from doing?

Readers may see flickers of other great works of dystopian fiction in “The Annual Migration of Clouds”, from to the genetically engineered pigoons of Margaret Atwood’s Flood trilogy, to the dangerous backwaters (and glimmers of hope) of Emily St John Mandel’s “Station Eleven”, and even the aforementioned Alien movies. Ultimately, The Annual Migration of Clouds is a unique work of fiction written in a voice that is by turns poetic and gutwrenching, humorous, and tragic. Premee Mohamed has created a dystopic future that is terrifying and yet hopeful: for what is a young woman daring to leave home for wider horizons than an expression of hope?

Personally, I can’t wait to see what Reid and her creator Premee Mohamed do next.

Premee Mohamed is an Indo-Caribbean scientist and speculative fiction author based in Edmonton, Alberta. Her short fiction has appeared in a number of venues. Her debut novel, Beneath the Rising, is out now from Solaris Books, with the sequel A Broken Darkness due out in 2021.

This article has been Digiproved © 2021 James Fisher
Acknowledgements: Terri Favro
Some Rights Reserved

Part II of a three-part excerpt from Amber McMillan's "The Running Trees has been posted! #LinkInBio